Paul Morphy. The Pride and Sorrow of Chess. 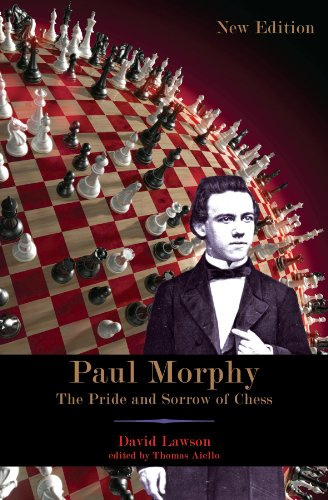 Paul Morphy: The Pride and Sorrow of Chess is the only full-length biography of Paul Morphy, the antebellum chess prodigy who launched United States participation in international chess and is still generally acknowledged as the greatest American chess player of all time. But Morphy was more than a player. He was a shy, retiring lawyer who had been taught that such games were no way to make a living. The strain of his fame and the pull of his domineering family led Morphy to set another precedent: chess madness. Morphy's mental descent after retiring from chess became a part of his lore, made all the more magnanimous by a spate of twentieth-century examples. The Pride and Sorrow of Chess tells the full known story of the life of Paul Morphy, from his privileged upbringing in New Orleans to his dominance of the chess world, to the later tragedy of his demise. This new edition of David Lawson's seminal work, still the principal source for all Morphy biographical presentations, also includes new biographical material about the biographer himself, telling the story of the author, his opus, and the previously unknown life that brought him to the research.