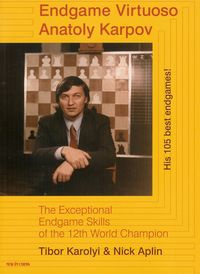 Anatoly Karpov’s legendary endgame technique has always been something of an enigma. Karpov became World Champion in 1975, as the successor of Bobby Fischer. With his fine endgame technique Karpov managed to win positions which nearly everybody else assessed as a draw.

This book takes, for the first time, a close look at his endgame technique, explaining the finer points better than Karpov himself has ever cared to do. All existing analysis has been reworked and many spectacular findings have been added. 'Endgame Virtuoso Anatoly Karpov' provides valuable insight into the qualities that made Karpov such a great endgame player, maybe the greatest of all time. A highly instructive and entertaining book.

Tibor Karolyi is an International Master and a former Hungarian Champion. He is an experienced chess coach (Peter Leko was among his pupils), who regularly contributes to various major chess magazines. He has written books about Garry Kasparov and Judit Polgar. Nick Aplin is an Associate Professor of Sport Studies at the National Institute of Education, Nanyang Technological University in Singapore.