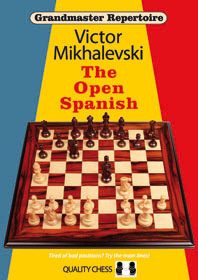 The Open Spanish is one of Black’s most direct methods of fighting against the Ruy Lopez. Instead of subjecting himself to the so-called “Spanish torture” of the Closed Ruy Lopez, Black boldly captures the e4-pawn and provokes an early confrontation.

Grandmaster Repertoire 13 – The Open Spanish provides a complete repertoire for Black after 1.e4 e5 2.Nf3 Nc6 3.Bb5 a6 4.Ba4 Nf6, based on the Open Variation which occurs after 5.0–0 Nxe4. Black’s system is built on the principles of fast and active development, and fighting for the initiative whenever the opportunity arises.

Victor Mikhalevski is an Israeli grandmaster with a peak rating of 2632. He has represented Israel at Olympiads and other major team events, and has won many international tournaments. He is renowned as one of the world’s foremost opening experts.