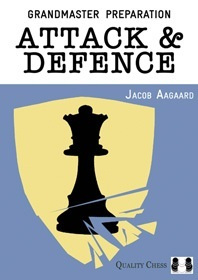 In Attack & Defence Jacob Aagaard presents the main principles of how to attack and defend in chess. By carving dynamic chess into separate areas of ability, he gives the reader a clear way to expand his understanding of this vital part of the game.

"Playing the violin and learning languages are similar activities - the brain needs a special map for these kinds of activities, so it has to be learned at an early age - due to some brain chemistry stuff, I guess. That explains why so many players get stuck at a certain level - their map is done! Depressing, eh? But that's where Aagaard (and other heavyweights like Dvoretsky and Yusupov) come to the rescue! The books in this series are designed to change the ‘chess map' in your brain! Jacob wants to transform that narrow path of finding good moves into a freeway where good moves flow!"
From the foreword by Sune Berg Hansen

Grandmaster Jacob Aagaard won the British Championship at his first and only attempt. He is the only author to have won the Boleslavsky Medal as well as the ACP, Guardian, ECF and ChessCafe Book of the Year awards. He is a FIDE Senior Trainer, and on his retirement from professional chess he has taken up the post of trainer for the Danish elite. His training material is used by amateurs, grandmasters and World Champions alike.

The Grandmaster Preparation series is aimed at ambitious players.